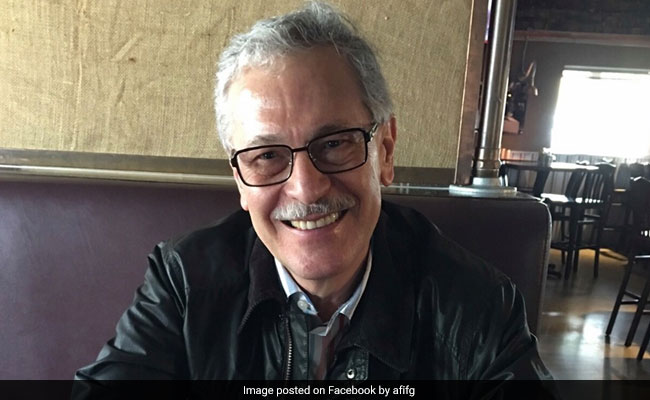 Mahmoud Ghannoum wants to thank the travel agent who helped him in 1990.

A groundbreaking scientist has been telling the story for almost 30 years, how one generous act by a stranger in Washington made his remarkable life possible.

And he’s hoping you can help him find the stranger, so he can finally say, “Thank you.”

Mahmoud Ghannoum, the scientist who is now known as the leading microbiome researcher in the world, was in trouble when the fateful encounter took place in 1990. His country, Kuwait, had just been invaded by Saddam Hussein, his city was in scorched-earth ruin and his young family was squatting in a dorm room in England while he tried to find work and a way to get them all to America.

He had one shot.

Months earlier, Ghannoum had agreed to speak at a science conference in Washington. He made those plans when he thought they’d all be in their apartment just outside Kuwait City, when the 10- and 6-year-olds would be back at school and his infant son would be home with mom and he would kiss everyone goodbye and be back in a couple of days with gifts from America.

But everything changed those first days in August, when Iraq invaded Kuwait. It was a frightening time.

“It is seared in me,” said Afif Ghannoum, the scientist’s oldest son, who was 10 when he watched the invasion of his homeland on television. “The fear. The look on my parents’ faces, knowing that everything we had was gone.”

All their assets were frozen, they didn’t know if their home had survived the invasion. And a real future in England wasn’t likely.

“I know in England, he could’ve just ended up as one of those stories: ‘That’s guy’s a scientist who now works at a fish and chips shop,’ ” Afif said.

That trip to Washington was the key to a new life in America. If dad could make a connection and find a job, it would work out, they figured. He printed out his resume, borrowed a suit and flew to America. He had two days.

But it was the wrong conference for job hunting, the scientists there told him. If he could just wait in D.C. for a week, the people doing all the hiring in his field would be in town the next week and he’d surely get a job, they said.

Waiting a week in Washington? Impossible.

“There was truly no money,” Afif said. “He was eating apples out of the hotel lobby. There was no way to just Venmo him some cash or anything. He had nowhere to stay, no place to go.”

But the family had one friend in America, a man in Milwaukee. If Ghannoum could get to Milwaukee, he could stay there, then return to Washington to meet with the people who could hire him.

On a whim, as he was walking from the conference rooms at the Willard Hotel and trying to hatch a plan, he stopped at a travel agency.

“I saw this travel agent who was a black guy,” he said. The man behind the counter looked up and asked Ghannoum, “Can I help you?” All he had was this one-way airline ticket back to England. He asked the agent if he could somehow reroute it to Milwaukee. The agent told him he’d lose his job if he did that.

“And I told him, ‘I am struggling. I see you are black, and you’ve struggled too. I need your help,’ ” he said.

The travel agent listened to the story from this Muslim man with a mustache and a brown suit, told through Ghannoum’s thick accent.

The travel agent didn’t turn him away, didn’t suspect a scam. He bought Ghannoum a round-trip ticket to Milwaukee, returning to D.C. in time to meet with prospective employers. And then he opened his wallet and gave him $80 cash. “So you have some spending money,” he told him.

The next week, the scientist met with all the hiring people. “I got two job offers,” he said. “When I returned to London, I was crying. It all happened because of that man in the travel agency.”

You know how you see probiotic health this? And gut health that? Ghannoum is the man primarily responsible for that research. He’s the scientist who named the mycobiome, he’s published more than 400 papers on the topic, lectures all over the world and has been funded by the National Institute of Health for more than 25 years, with almost $50 million in grants. He’s a professor and the director of the Center for Medical Mycology at Case Western Reserve University and University Hospitals Cleveland Medical Center. He’s even a big deal on Gwyneth Paltrow’s Goop, y’all.

And he firmly believes he was able to do all this because of the kindness of that travel agent.

He should have gotten the man’s name and the address of the travel agency so he could pay him back, but he didn’t. He remembers that the man was young, with close-cropped hair and he wore dark trousers and a white shirt. It was in late 1990